In April, a group of Senior school students had the privilege to hear from a special guest speaker, Holocaust survivor Robert Waisman. Mr. Waisman shared his story of survival with our Social Studies 11 and History 12 students.

A former president of the Vancouver Holocaust Society, Mr. Waisman is a well-known speaker on the Holocaust. He has recently worked with the German government on their Holocaust Memorial Day events, and has addressed the BC Legislature.

In September 1939, when Mr. Waisman was eight years old, the Nazis invaded Poland. He was taken to a munitions factory where he worked stamping initials on anti-aircraft shells. Later he was moved to the Buchenwald Concentration Camp, where he was one of the youngest prisoners.

On April 11, 1945, the American army liberated Buchenwald. Mr. Waisman was one of 426 children who survived from this camp. He has a vivid memory of being liberated by the American army, and recalls one young soldier in particular — the first black person he’d ever seen. Nearly 40 years later he was reunited with this soldier, named Leon Bass, and they became good friends. 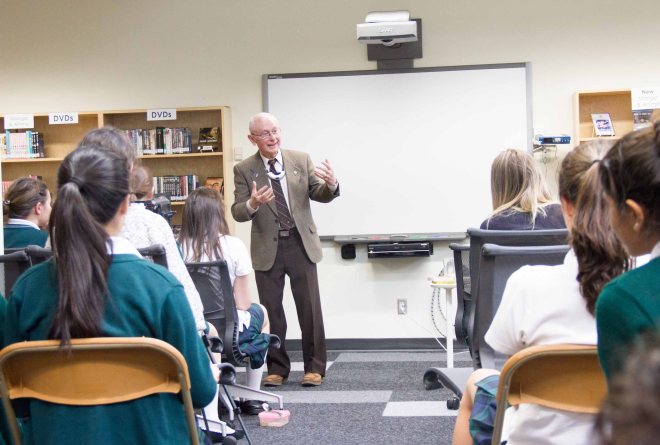 Mr. Waisman and his sister (who he was reunited with years later) were the only survivors from his family. His parents and four siblings had been killed by the Nazis. After the war, he lived in France for a few years before eventually immigrating to Canada. He now honours the memory of those who were murdered by speaking about the Holocaust.

Special thank you to Aria, Gr. 11, and the Druker family for organizing Mr. Waisman’s visit. To learn more about his extraordinary story, visit the links below.