In 2013, she also founded Moral Courage TV, an award-winning YouTube channel that features people around the world who are standing up when others want them to sit down. The channel has led to a new TV series that Irshad is currently filming with the Los Angeles-based production company, Entertainment One.

Impassioned to equip a new generation to stand for ethical change, whether Irshad is teaching at universities, innovation labs, or high schools, moral courage is her core message. Irshad defines moral courage as doing the right thing in the face of one’s fears; something that she believes is critical to fostering the ability to express oneself as well as building the capacity to hear other people’s perspectives. Attributes that she also believes are essential to diversity of thought, the wellspring of innovation.

In her work with the Moral Courage Project, she prepares people to face fears that often include rejection from family, job loss, and disapproval by people in authority. However, Irshad teaches that the reward for taking these risks is two-fold: personal integrity and social impact.

Over the course of three days, from October 5th to 7th, Irshad met with YHS students in both the Junior and Senior School, and parents and faculty, to engage in conversations about moral courage. On the path to exploring moral courage at York House, she challenged each of us to think about how we can choose to do the right thing in the face of our fears; how we define who we are; how we determine what we value; and how we find the courage to stand up and make positive change in the community as well as the world around us. Irshad’s visit to York House was about giving the girls the opportunity to explore moral courage as the heart of personal growth, self-awareness, and finding one’s voice.

Coming to York House was a homecoming of sorts for Irshad. Born in Uganda, Irshad’s family moved to Canada as refugees when she was young and she attended public high school in Richmond. She spoke of how, as a young girl, she would often ride the bus along Granville Street into Vancouver, past York House School, and dream that she could one day attend YHS. Well, she finally got to York House, and we were delighted to have her.

To a packed house in the Senior School on assembly day, Irshad shared her story of growing up in Richmond and attending “madrasa” (an Arabic word that, in the west, usually refers to a school or college for the study of the Islamic religion) on Saturdays. It was through her religion that she began to ask questions that would test her faith such as, “Why can’t girls lead prayer?” It was then that she began to explore the essence of moral courage and how to reconcile the tension between what you believe in and one’s upbringing.

She was worried about the impact on her family and whether her family would be judged by her actions, but still she stopped going to madrasa on Saturdays. Instead, she dedicated time to studying culture and religion and discovering that Islam, in fact, has a rich tradition of questioning. This discovery allowed her to reconcile herself with her religion once again, though she still had more questions.

Irshad continued to excel in high school and was involved in the debate club, theatre and was her class valedictorian. She later attended UBC where she graduated with high honours. Shortly after she graduated, she landed her dream job, working on a show about spirituality. Two days after starting her dream job, she quit, compelled to begin work on the writing her first book, “The Trouble with Islam Today”, that asks her fellow Muslims, “What have we done to ourselves?”

However, while Irshad’s own personal exploration of moral courage and doing the right thing in the face of her fears stemmed from her religious dilemma, she emphasized that moral courage is not just about religion. It is about having the strength to ask the questions that you need to ask on your own journey and knowing that if you want to have an impact, you need to be authentic and you need to have grit and resiliency. It is for you to decide what impact means to you, large or small, and figure out what you believe in so passionately that you are willing to take some criticism for it.

She asked the girls to think of what their values are and whether they have tested them. How would they reconcile that disconnect between what they believe in and what others believe?

A dynamic and engaging speaker, as Irshad spoke to different grades of Yorkies, it was obvious to see that she was making connections across the school. With the Grade 3 students, she spoke to the girls about the importance of kindness and gratitude and asked them to think about how they would treat a young girl with a disability. The Grade 4 and 5 girls were asked to think about how they would approach a teacher if they had a difficult question or did not agree with how they were being treated by their teacher.

The Grade 6 and 7 assembly was quite poignant as Irshad opened up about how she had been a bully to someone when she was in Grade 7, and she asked the girls to share how they would respond to her if they could speak to her now. One girl was brave enough to share that she would leave a note, sign the note and offer to help young Irshad. For the senior girls, she shifted the discussion to the prevalence of perfectionism among young women.

Two students in the Junior School presented Irshad with gifts the day after she spoke with them. One student drew a beautiful picture that she called the “Chain of Love and Kindness”.

“I am going to treasure this piece, frame it and put it on my wall,” said Irshad.

Another student, a young author herself, made a bookmark for Irshad that read “Keep Calm and Make More Books”. This is just the kind of encouragement that Irshad needs as she embarks on the writing of her third book in the coming months (a book that will guide readers to become “gutsy global citizens”).

In the Senior School, in addition to speaking to the girls at assembly, Irshad was also available to the girls for casual conversations between classes and joined the Student Executive for lunch.

Commenting on her time with Irshad, Head Girl, Helen, said, “She reaffirmed for us that all girls have voices and the right to respectfully challenge and ask the important questions. Something that is very important for us to know as we go on to university.”

Echoing Helen’s sentiment, Community Service Captain, Aria shared, “She really helped us to develop the tools to express your moral courage. She was also very open to us asking her the tough questions and told us that, ‘Questions are the soul’s way of saying that you are ready to grow’.”

For the past few years Social Studies Teacher, Sonia Baldiserra has been showing her Ethics 9 students Irshad’s Moral Courage YouTube channel where they can see many real life examples of everyday people making a difference in their own lives and the lives of others.

Sonia commented, “To have Irshad in the classroom was truly exhilarating as she challenged the girls to not only think upon, but act on their beliefs. In a particularly powerful role modelling exercise, Irshad transported us back to her own experience as a Grade 9 student who witnessed a wrong in her classroom. It created an intense but meaningful learning opportunity as I watched the girls find the strength to voice their opinions and stand up for what they believe in. Within minutes, the girls were jumping in to support each other and they stood up to Irshad (as the instigator in this role play). It was wonderful to watch their moral courage unfold; an experience the girls will surely remember.”

Following Irshad’s visit, Sonia’s Grade 9 Ethics students were asked to write about a current or historical individual, famous or not, who has displayed moral courage and why. She was pleasantly surprised by what they came up with. It was obvious that Irshad made an impact and they really thought about what they heard.

Further commenting on her time at York House, Irshad said, “I have been heartened by the wisdom of many of the students. Where have they picked up on these ideas, these approaches, these ways of dealing with conflict and tension? One hopes that if and when they face a situation involving such conflict, that they will actually remember to follow their own wisdom. I have been simply delighted by what I have heard from the students.”

Irshad added, “The fact that there are students who so appreciate what you have done and also know how much you appreciate their contribution is very fulfilling. It is so rewarding as an educator to know that you have done exactly what you set out to do, which is both to teach and to learn.”

Her conversation with parents was equally dynamic. Many voiced support for Irshad’s message as she emphasized the importance of these types of discussion in the early years of education. “I believe that when preparatory schools like York House create spaces to allow diversity of thought to flourish, from that diversity comes innovation. And by innovation, I don’t just mean technological innovation, but how we innovate ourselves as citizens of this world. If we can create spaces where that can flourish then many of these students that go onto university will have the opportunity to flex their moral courage muscle in the years prior to stepping onto a university campus.”

For Irshad, the most important takeaway for the entire York House community is recognizing that having a voice does not mean using it to argue your point but also to invite disagreement, challenge and doubt because you will learn something about yourself in the process.

It’s also about being clear with yourself on why something matters to you and knowing that you could be judged for your beliefs and actions. Choosing your battles, picking your moments and understanding the risks is a self-awareness journey that all of us are on and will continue until our dying breath.

We will continue to work with Irshad throughout the year, as we explore ways to empower our students to be more self-confident and to find their own voice. We look forward to sharing our progress with you. 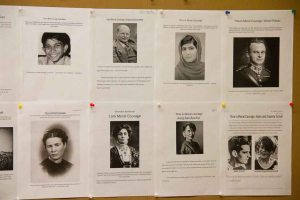 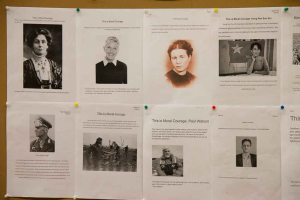 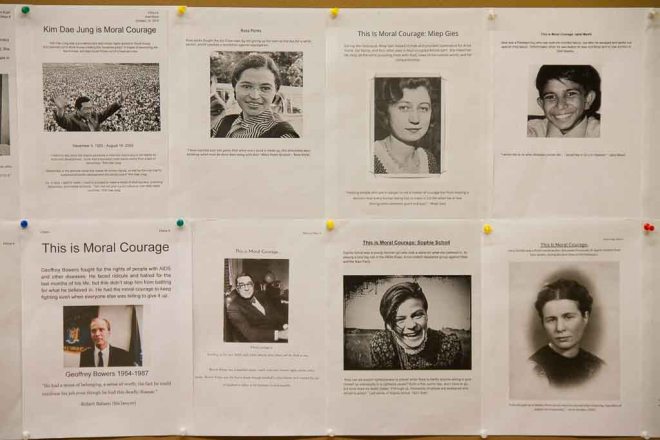